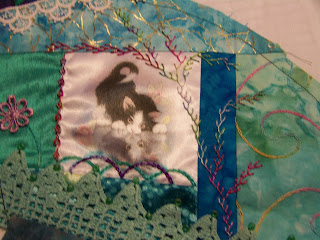 I am sending off Moira's block today. This is the round robin I am in with a small group of friends, Moira, Susan and Gail.

This is the section I embellished, around the kitten.

I had commented to Moira that some of the fabrics and laces looked familiar. She told me they were ones I had given her! 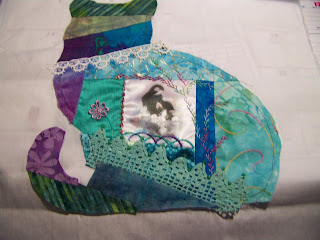 This is the whole block. 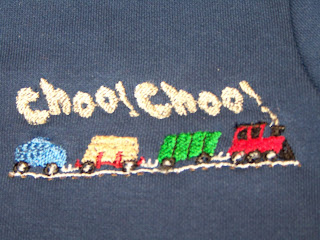 Today is Keaton (DGS#2) 2nd birthday. He loves choo-choos, so I used my embroidery machine to
embroider a choo-choo on a hooded T-shirt. 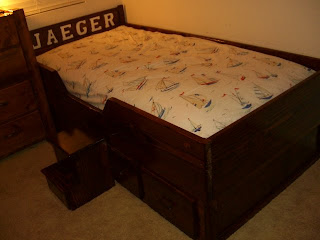 This is the bed DH (Papa) just finished building for DGS#1 Jaeger. It has 6 drawers underneath and a secret compartment for Jaeger to put the treasure box Papa also made. It is a captain's bed, originally a pirate captain's bed, but he said now he wants it to be his Star Wars bed.

We delivered this the other night and assembled it. Keaton thinks it is his bed!


John plans this furniture and builds it himself. Most of the furniture in our house are what he has constructed. 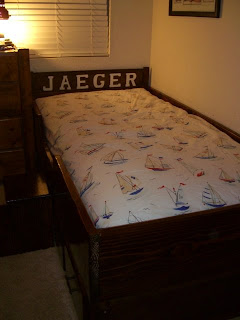 This is another view. John realized after putting it together
that the headboard could be a little taller, he was worried about the window. So when he builds Keaton's bed and delivers it, he is going to make another headboard that goes up to the window ledge and we will take this one off.

Kyleigh also recently got a new, much taller bed, so Papa built her a stool, and I am going to stencil that today. She has a new "grown up girl's bedroom that has recently been painted and very nice.

I love what you did on Moira's block. I recognize at least one fabric I sent, too. The bed is fabulous. How fun for the boys! I know that Choo-choo will be a big hit!

Hi Karrin! I love the block! It's beautiful! I love all of the stitching and the different threads.
The bed is awesome. I think it's so cool that your DH builds furniture. You are a lucky woman!

Your block is awesome! I am just so in awe of your delicate stitching! Beautiful. Your DH did a fantastic job on the bed! WOW! Great pictures - thank you for sharing!