I had previously mentioned and posted about my little quiltlet I recently got back after 15 months, on January 3rd. Sharon has a very nice post here about all of the steps we went through, and pictures of all the quilts. We had based this round robin on one that MayBritt at Abyquilt in Norway had previously participated in. 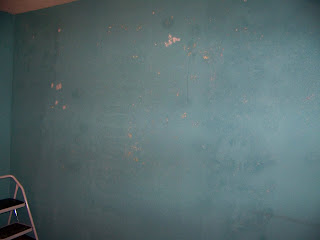 Room progress: I finally got the wallpaper off about half of the room. I had planned to start painting today. But that might change. I had previously talked to DH about taking down the popcorn ceiling. He didn't seem that excited at the time, but mentioned it this morning. I would rather do it now, while the room is half empty and the fish tanks are gone. So we might be doing that this morning.

We are working in sections, as my rolltop desk I use for my business is opposite this wall. I can't really move out of this room until we are done, because the DSL connection which I need for my business is on the opposite wall from this. I am going to have to paint what I can, scoot my desk out from the wall and work behind it for awhile. Also where you can see this ladder, is the window wall, looking out front. I will need to move a built-in bookcase that is on the window wall and all the stuff on it. 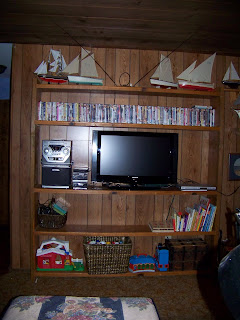 This is the bookcase that formerly held magazines, fish tank and a lot of stuff in my office. John talked about getting rid of it, but I am attached to this sturdy bookcase. He probably made it over 30 years ago. He reconfigured one of the shelves so my TV would fit on it and we put it out in the room I sit in when I want to stitch and watch "chick flicks" I was also able to put DGS's toys at the bottom.

On of these days, the plan is to take the paneling out of this room, and I will paint the walls. I don't think this year though! 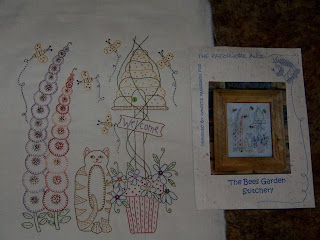 Last night I was able to finish stitching this UFO. I had started it last year, had intended it for Kyleigh's BD in August, but with Katie's wedding that didn't happen. I wanted to finish it for Christmas, but that didn't happen either, with the cruise and getting back home and it was Christmas.

So I finished the stitchery. She requested a wall hanging so that is all I have left to do. This was from a Lynnette Anderson kit I got a number of years ago. It came out really cute, and reminds me of Kyleigh's cat that died last year.
Posted by Karrin Hurd at 4:53 AM 2 comments: 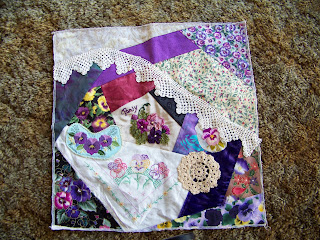 My small group of friends, Moira, Susan, Gail and Candi and I are starting another round of our round robin. Because I have had so much else going on, I decided to send around this pansy block. I had started the Peacemaker's 2001 CQ flower quilt, probably shortly after the calendar came out. I am almost finished with the sunflower block, and had pieced this Pansy block,. and silk ribbon embroidered the center pansy block, but never got any further. So this is what I am sending around this time. These ladies I am working with always work magic on the blocks we send around. 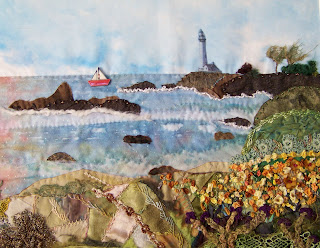 I finished my lighthouse landscape this past weekend. This is a closeup of the piece. 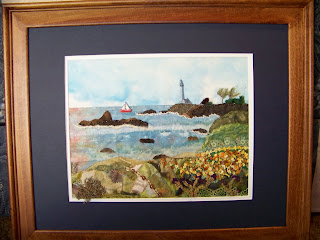 And the whole piece matted and framed. 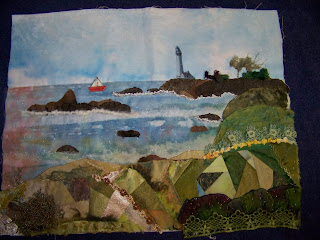 I have been working really hard on this project I started in Asilomar in 2006 which was a class I took from Judith Baker Montano. The end of December I received an e-mail from Judith (as did other students), inquiring if we were finished with our projects, and if we could send a finished picture of our project by the 19th of January, she would like to include our projects in her next book, in a student project section in her next book which comes out in May 2009. If we do this, we are to receive a copy of the book. So I have been working like crazy to finish this up by Friday the 16th so I can e-mail the finished picture. I replaced my original lighthouse becaue the other one was falling off. I am close to putting a bunch of yellow flowers in the foreground but am laying in some folliage behind it first. I am watching the grandsons all day on Saturday, so I really need this done before that time. 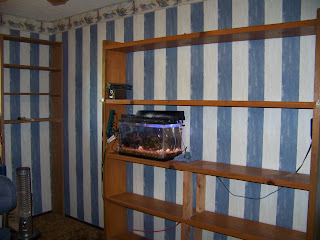 As for my craft room/office redo, the carpenter who is building the cabinets (DH) has not been feeling too energetic this week, but he did get the
shell of 1 cabinet done.

I managed to totally empty this bookcase and the corner section. I need to empty this 10 gallon fish tank, and a larger 30 gallon fishtank which sits beside my desk and move them to the counter in the spare bathroom. This bookcase is going to be used in another part of the house. I can't peel the wallpaper in this section until I do this, maybe today.

I don't want to take too much time away from my sewing time though. 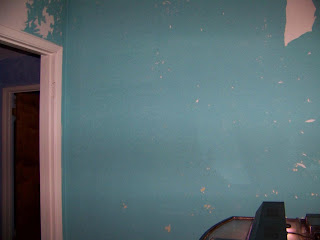 I did manage to peel down this section by the door. At the bottom of this photo is the top of the other fish tank I need to move.

This turquoise color was the color of the room when this was Katie's bedroom. When I made this room my office I papered it with the beach house wallpaper with lighthouse borders at the top. In peeling this off, I decided I really love this color.

I had planned on doing some faux painting, but then in looking through my books, I got this idea in my head to crackle. I had planned on painting over this color (assuming the wallpaper came off totally clean), and then painting over with an antique parchement or some cream colored paint and having the turquoise show through. It peeled off sort of clean where I could get to it on this wall, but if you look over the doorway, that whole wall hasn't. The white is all stuff I need to get off, and I am still peeling. So I am going to have to do the 3 step method, paint, crackle layer, and then overcoat of pain that crackles through.

I need to get over to Lowe's which is about 10 to 15 minutes away. My Home Depot yesterday didn't have the crackle stuff, or much of anything else I was looking for. We'll see if I can get off early today, or might have to wait until I finish my lighthouse project later on this week.

Cleaning Up My Act, Almost and Apologies 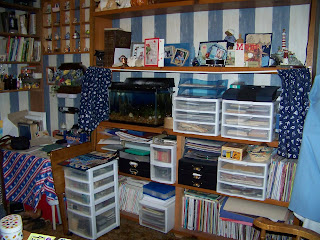 After I finish my current project, which is a UFO, and I can't talk about right now, I have
an even bigger project we are going to tackle, a total redo of my office, and the the section I use for working on paper crafts, card making, stamping, painting. Under all this stuff, my storage for scrapbook papers, magazines, etc. is a bookcase DH built at least 30 years ago. He has been talking for awhile about taking all this "stuff" out of the room, removing the bookcase, and putting in an 8 foot countertop where I can work on my projects. Then building cabinets above and below, where I can put all this "stuff".
After we move this "stuff" and clear this area of the room, I intend to take the beach house striped wallpaper down, and do some faux painting of the walls and we might even get ambitious and take the popcorn ceiling down. This is one of the few rooms we haven't done yet, mainly because of my wall-to-wall "stuff"

The little card table in the corner is where I usually work on my projects that are not sewing or CQ related. This table is also the table I tend to stack things to be taken care of later. In preparation for moving all my "stuff" I have been cleaning up the card table and sorting things, and embarrassingly realized that I had not posted about a few things I should have long ago.

Back in September, I participated in a swap organized by Marilyn, a wonderful mixed media artist and teacher from New York. She had a blog, self-portrait challenge swap. I was thrilled to receive a copy of Marilyn's own self-portrait. 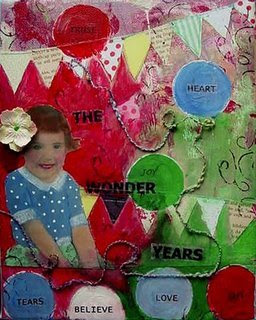 All 6 of the participants self-portraits are shown in her September 22nd post.

When I came across this envelope in my pile of things to take care of later (in this case, getting a frame for this lovely piece), I realized I had never posted about it.

My apologies Marilyn, I am not usually so ditzy. 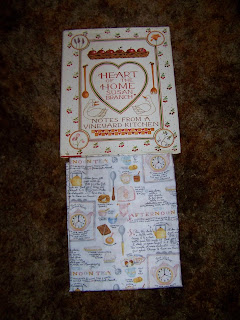 The other items that I realized I had never posted about was
what I won on Kim's blog sometime right before Katie's wedding. It is a Susan Branch cookbook, which I have enjoyed several times, making I think the apple crisp recipe and also a chicken and sour cream casserole, which were both quite yummy. Kim also sent a long some Susan Branch fabric which I plan to use as a backing for a quilt, when I actually have time to do something like quilting. I had the fabric sitting in my pile of stuff on the little table, waiting to blog about it, and realized yesterday I had never gotten around to that either, in the excitement of getting ready for Katie's wedding, and post wedding running over to the newlywed's house and feeding the cats for several days.

Anyway, even though I thanked Kim personally in an e-mail, I apologize for never blogging about it.


After I finish my CQ UFO, and am able to blog about it, I am looking forward to Cleaning Up My Act and being better organized and a tidier work space. It will be especially nice to have a work table at a more workable level. The card table was killing my back!

BY THE SEA QUILT 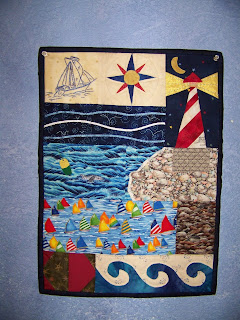 Fifteen months ago, I joined 14 other ladies in a round robin.
I sent off a bluework sailboat block, and each month we had a specific task to do on the blocks that went around. My friend Jan, the person I sent to added the mariner's compass next, and so on.

Anyway, yesterday my quiltlet came back home quilted, bound and ready to hang. I could not be any happier. It also looks great against my blue walls.

Anyway, RR Bloggers, I am thrilled with my quiltlet, it is perfect and suits our house perfectly! Thanks for all your wonderful work! 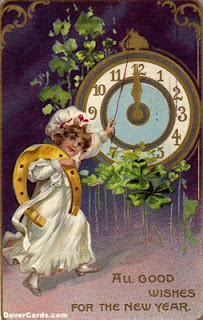 All my best wishes for the New Year for you all.

I have been rather quiet since I got back from vacation for a number of reasons, computer problems, I had my DSL modem go out last week, for which I had to buy a new one and get that installed.

To top it all off, I got a cold almost as soon as I got back home from Hawaii, and my cough has just been hanging on, and not going away. I finally went to the doctor 2 days ago, and found out I have pneumonia/bronchitis. So I now have some antibiotics to fight that. Enough about that.

The exciting thing is that yesterday afternoon my Christmas present from DH came in the mail, and this is what I got

It is a Cricut Expression cutting machine. It can cut out letters, cards, shapes, and it has multiple uses, can even cut out fabric in shapes or words for quilting. I played a little bit with it last night. I knew it was on its way. DH saw the infomercial on TV and ordered it. What a sweetheart!