I have done very little in hand work these past few weeks, with John being hospitalized, and now home with Hospice care.  I did manage to pull out an old crochet UFO this week.  Back about 3-4 years ago, crochet mermaid tail blankets were popular.  I made one for granddaughters Kyleigh and Klara.  Our daughter Kristen decided she wanted one.  Then I started on one for myself.  I found out that my sister-in-law Char wanted one too.  I finished the one I was working on, and gave it to Char.  And then I started another one for myself.  I got about 10 inches done and put it away.

I pulled it out again this week, couldn't figure out what row I was on exactly and pulled it out and restarted.  I have one more row to go to finish this part of the cocoon/tail, and then I change yarns and am start the fin part next. 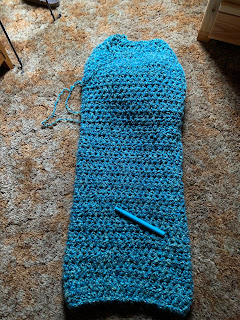 I have also been wanting to knit some washcloths, Kathy @Kathy's Quilts has been working with the little sea creatures.  First up though I want to work on this Unicorn for granddaughter Klara.  I just got the purple yarn so I haven't started yet.  This is what it looks like.  I got the pattern at Ravelry, but can't get into my account now for some reason to give the link. 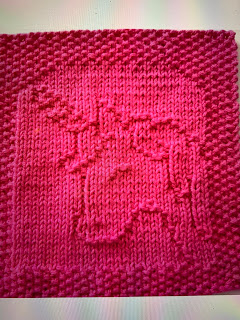 I will be linking up to Kathy's Quilts for Slow Sunday Stitching,   Head on over and find out what people have been up to.

As far as John is concerned, Hospice has been here 3-4 days a week.  His brother Roger is here and has been an enormous help.  We had a bit of a scare three nights ago.  I had John on the baby monitor while I went to bed.   I went to bed at 9, and got up to check John to make sure he didn't need his pants changed.  He didn't really respond to me and was dry so I went back to bed.

About 11:30 I noticed his breathing changed, he would have long pauses (from his sleep apnea), then start snoring really heavy, and as the night went on, after the heavy breathing there was a cough and it sounded like he was choking on secretions.  They sent an RN out about 4:30, and we gave him a breathing treatment, increased his oxygen to 4 liters, and got a prescription for Levsin to decrease secretions.  They also placed him on continuous care and had two shifts come on to help care for him.  We found out they were not able to cover the night shift, so Roger and I split the night staying with him.

Yesterday morning another nurse came to be with him 8 am- 4 pm but after that they apparently had to cover other patients more serious, so Roger and I split the night again.  I think someone will be coming this morning, but probably the other two shifts are not covered, and I suspect they will put him on regular care with his normal nurses and home health aide on Monday.   If he worsens again I can call someone out to see him emergently.

John has been alternately totally out of it, somewhat aware, and then a little more aware and somewhat  conversant.  Two days he was really out of it, he didn't eat or drink at all, because we were afraid of choking.   Yesterday he was able to have an Ensure for lunch and dinner.

I took this picture the other day of Roger and John. 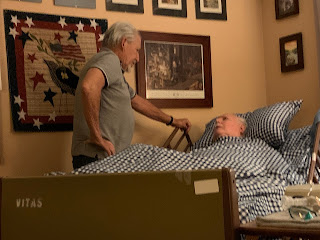 That's all I know right now.  Thanks for stopping by!

Hopefully you will be able to sit with john and do some crochet. You are doing an amazing job. Take care of yourself too! Xx

John is certainly getting the best of care and from loving people. I'm happy to read of the support you have which is so necessary for this part of the journey.
Meanwhile, crocheting is a great in hand project and how clever you are to do those wash cloths with the designs like Kathy's. I don't know know what your mermaids fin afghan will look like. Interesting!

I'm so sorry you're going through this, but so glad you have help. Knitting and crocheting seem like soothing things to be able to do when you are sitting with John. Thinking of you, Karrin!

Crochet will help you go through out all of this.
The unicorn is a pretty wash coth. Hope you figure out what's happen and get the pattern.
Sending prayers your way. Take care, Karrin.

What a difficult time. I'm so glad you have help and are not trying to do it all on your own. Bless you.

Karrin, I am thinking of you all the time. Praying for you, John and your family. I am glad that you have been able to pick up the crocheting now. I find it to be one of the easiests crafts to complete in times of crisis. I hope you can get increased care. I understand what you are going through. Take care of yourself.

Karrin I recognized your photo as someone I play words with friends. I am Liz Florom. We’ve sent the funny cartoon characters lol. Reading your post here is a grim reminder of what I went through with my husband in 2018. He died from lung cancer October 2018. I feel all your issues and if you ever want to talk you can reach me through here and more. Hugs.

such a stressful time. I hope the crochet helps to keep you calm through all of this.

Lovely crochet projects, Karrin and hope these projects provide a bit of comfort as you are your family are going through this difficult time. Sending prayers.

I think you are an amazing wife, mother to do this for the love of your life. I lost my husband suddenly 2 months ago to a heart attack. He had been perfectly healthy till the day he passed. I always said no matter how hard, if I had to I would do what you are doing. I hope you continue to get the support you need and that your husband doesn't suffer in the time he has left with you.

Praying for you and John, I’ll send you an email. You are AMAZING!