I had a great Mother's Day, just being with my daughters and my grandchildren.  They all came and hung out with us for the afternoon.  It was a perfect day for me! 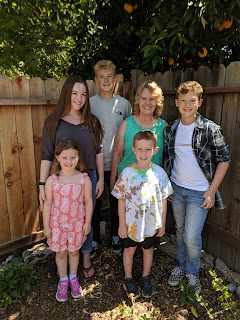 The grandchildren and I. 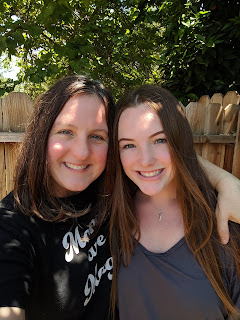 Daughter Katie, and granddaughter Kyleigh who is home from college. 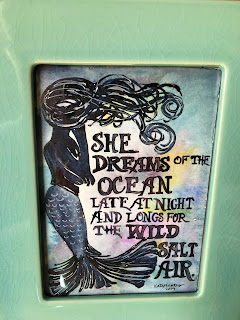 Katie painted this for me for Mother's Day.  She does beautiful watercolors. paints her own cards, and invitations to the children's parties, and usually paints something for everyone's gift.  The two smaller children in the first picture are Katie's, Klara and John.

The Saturday before Mother's day, Katie brought some things over from her mother-in-law, who will be moving shortly to Arizona.  She had 3 huge orchids she gave to me.  The one in the blue pot, which is actually outside my dining room window.  The other two I have scattered outside the house.  All my orchids are indoors, the ones with flowers on them in this window.  Debbie knew I would love them and take good care of them!  She also gave me a baker's rack which I set up on the other side of this window, with some begonias she had that are still recovering from our winter. 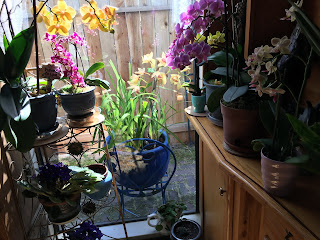 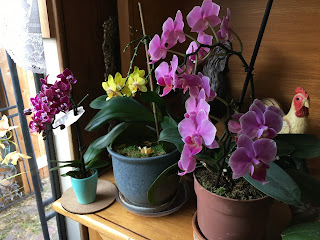 Besides my wonderful weekend, last week,beginning on the Saturday, I sort of felt like bad juju was following me around.  First, I was washing the red, white and blue quilt I donated to Mercyful Quilts for Hands2Help coordinated by Sarah at Confessions of a Fabric Addict and my washer started making really wierd noises, and then wouldn't spin the final rinse, so I had to squeeze it out myself.

We have a home warranty program, and I had called them out last September because the washer had made a horrible screaming noise, like a jet engine had landed in my laundry room.  After that it was really loud spinning, and not spinning effectively.  A technician came out, and said the warranty did not cover "noises" but he put in new shock absorbers.  It was still shaking all over the place and LOUD.  He told me I should not call unless it broke. It was a normal noise.  Right before Easter, it stopped draining.  So I paid another $100 and they put in a new pump.  Still made horrible noises, and shook all over the place.  So we come to the last time when it was not spinning hardly and my clothes are drenching wet.

I actually was taping the washer on my Ipad during a spinning cycle, when in error message came on to prove to them there was something.  So they came out again last week and I had to pay another $100.  They decided the basket and a whole bunch of parts needed to be replaced.  They called the manufacturer who told them it was not normal wear and tear so the parts were denied unless I paid for them.   I called to complain so they sent a second opinion out on Friday.  He said the original screaming noise was my bearing going out and that put everything out of whack and that was why it failed.

So I had to wait until yesterday for the company to call and tell me they were replacing my washer.  I could go with the one they sugggested, or buy my own and they would reimburse me $642.  So that is what we opted for.  So I made 2 trips to the appliance store yesterday and it should be delivered tomorrow.

My daughter Katie has been kindly doing my laundry.

As for my projects, I have felt off because of this washer thing and fighting to get a new one.

I did finish my Hospital Sketches block this month, the BOM by Barbara Brackman at Civil War Quilts.  This was Coxcomb and Currants.  I didn't feel motivated to do 12 currants on each stalk, I did 5 instead.  This came close after I just finished the Flourishes blocks with 42 berries. 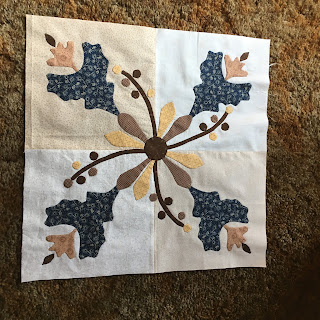 These are all four blocks together 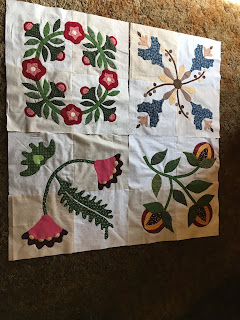 I also was able to get all of the Hands2Help quilts I am doing quilted.  I quilted this Sunbonnet Sue, which will be going to Quilty Hugs. 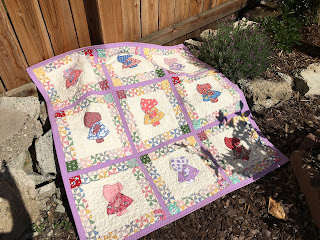 Both of these are going to Quilty Hugs 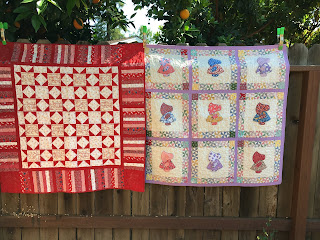 I have two more for Jack's Basket and will take pictures when I get them back from Katie washing them.

Thanks for stopping by.  Am going to try to get my momentum going again today now that the washer issue is about to be resolved.

Happy to hear the washer problems have resolved! The orchids are gorgeous. You have quite the green thumb. :-)

Glad you are getting a new washer. What a time for the older one to quit. Wow, so many quilts for H2H. You have really been busy. Your daughter's cards are awesome, she is a talented artist.

My daughter would love that lovely painted gift from your daughter! So beautiful!

What a finale to the washer saga! That was a mess up from the word go. Did you buy the same brand? Your grandchildren are all so beautiful. I love that picture of all of you. Katie's art is lovely, as are the orchids. It sounds like a lovely time. Your quilts, of course, will be treasures wherever they go. Hospital Sketches blocks are beauties, too. I sent the link to someone today so they could see how pretty your blocks are.

That is definitely a happier ending to the washer debacle! Kind of the compnay to finally realize the machine was a lemon from the get go and make it right! Some lovely things though to lift your spirits. Kids are such a gift!