It's been another busy week, amid the heat, and fires, and smoke of Northern California.   While we do not have any imminent fires around us, the skies have been brown since last week, there has been ash falling from the sky and smoke so bad I need to wear a mask to mow and water outside.   The nearest fires right now are probably 30-50 miles away.

I've accomplished a lot this week, despite having a migraine a whole day due to the smoke.  This is last week's block for the Pieces From the Past Sewalong by Melva @ Melva Loves Scraps.  This one is called Indiana Star.  It was published in the Kansas  City Star July 21, 1937. 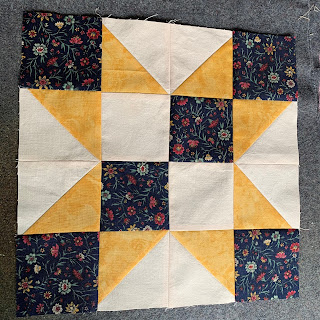 I also finished two blocks for the QAL by the Sea.  This one was designed by Jennifer Fulton @The  Inquiring Quilter. 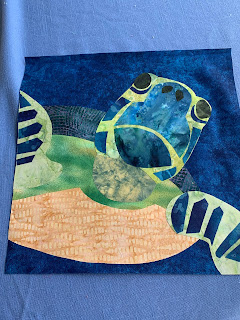 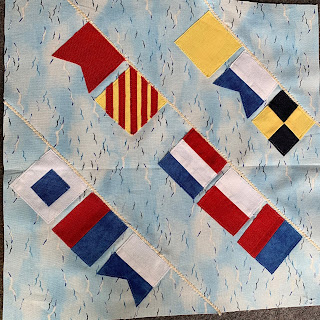 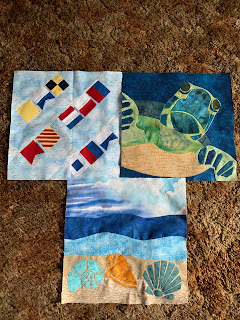 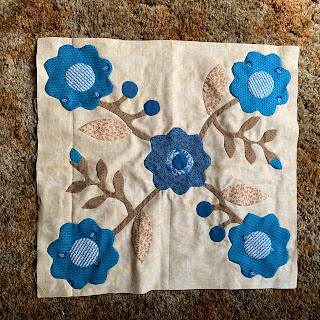 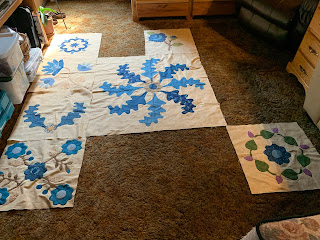 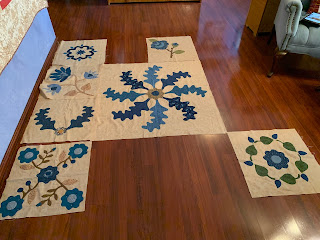 Lastly I finished the quilting on this fall quilt for my daughter's birthday on Monday.  It was a Partners in Design QAL from 2 years ago.  My daughter loves owls, so I thought this would be perfect for her. 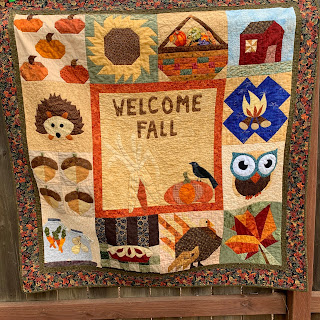 So for Slow Sunday Stitching this week I will be working on a new tea towel.  I finished the chocolate one. 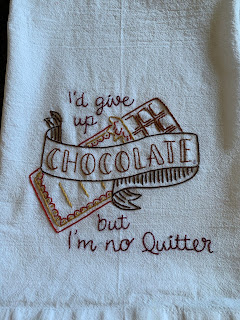 I got this new transfer pack from Stitchers Revolution. 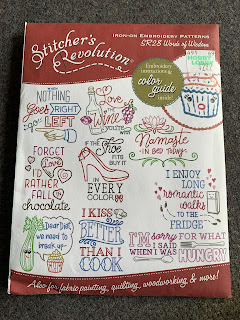 I've got this wine one ready to stitch for my sister. 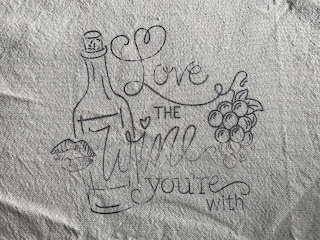 I'll be linking up with Slow Sunday Stitching on Kathy's Quilts.  Head on over and check out what everyone has been up to.

Labels: Cassandra's Circle, Pieces from the Past, QAL by the Sea, Slow Sunday Stitching

Thanks for posting as I began to worry about you and the heart-breaking Calif fires. Understandably they would be headache producing. It’s good that you can continue to stitch.

Love your applique blocks, your embroidery is nice too. I've had other friends complain about the poor air quality with all the smoke in the air. Praying that California gets a heavy rain soon that puts out the fires!

You have been sooo busy girl. So sorry the fires are within a 50 mile range of your home... steadfastly in my prayers for sure !!!
Your quilting and applique is amazing and your embroidery is too.. thanks for sharing so much. I hope your migraines heal !

So many beautiful projects. I LOVE the turtle. Hugs

I'm sorry the fires are causing migranes.... and hoping they stay far away from you. You sent me on a blog chase with that turtle - he is adorable.. I might have to make one! Love the blue berry change on the block. Happy stitching.

So glad to hear that you are well...except for the awful smoke!

You are so productive! I am following the Partners in Design quilt along, but not participating this year. I am still working on last year's quilt. It is in the quilting stage, so I will have it finished this year! :)

That will be a beautiful applique quilt! What clever humorous stitcheries.

My sister lives in Northern California-it is heartbreaking to see the fires.

Carla A Few Of My Favorite Things said...

Oh what a difference those blue berries made in making that block fit in better! Lots of great blocks and I hope the fires don't come your way! So scary these days between storms and fires. The hurricanes are heading towards our coast but we are far enough north we probably won't even get any rain, but I pray those closer to the coast will be safe.

I am amazed at all that you accomplish!
I'm still just starting my chocolate embroidery block and you're already done!
Love the new pattern set you found.
And those applique blocks are gorgeous too!

Love your blue BOM...good call to switch out the purple berries for blue ones...look lovely! Those fires are awful...we had one a couple summers ago, that far from us...the smoke and haze was bad.

I've been thinking about you in California this week - what a horrible situation - and certainly headache inducing. We're experiencing the same in Colorado with all the fires, too, but sounds like you are closer to them than we are. Hot, dry, windy, and lightning are never a good combination. All of your QAL blocks are so pretty! I really like the latest star for Pieces of the Past!

The wildfires are ravaging once again causing heartache and distress. I am sorry you have had a hard week with your migraines and with the heavy smoke that seems to never go away. You have stitched some lovely blocks though. You always seem to have a week filled with stitching lovely blocks. Your daughter's quilt is sweet. She will love it.

Your tea towel is so pretty, as are your BOMs! That quilted project came out lovely! Praying for your safety from these fires!

Pretty blues in your "Cassandra" blocks.

I hope the smoke is not causing breathing problems for you or your family. I hope California gets enough rain to put out the fires.

It's so cute that the signal flag block actually spells out QAL By The Sea! So clever :)