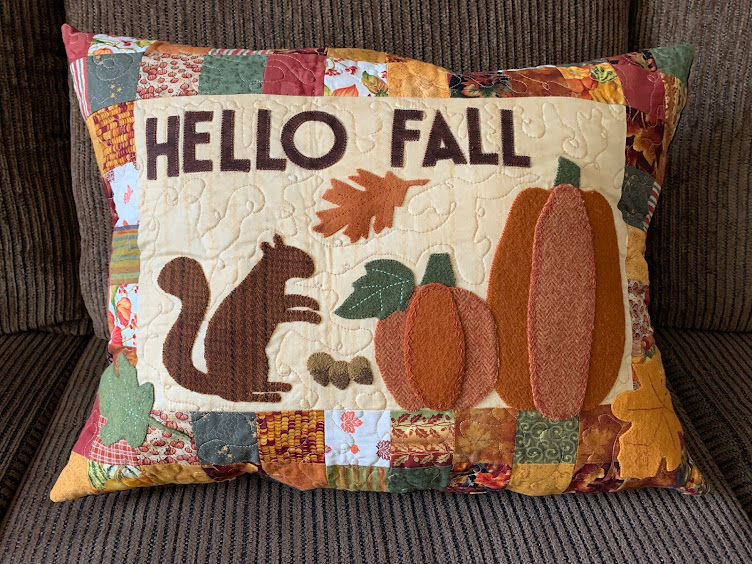 12 Days of Christmas In July Blog Hop and Quilt Along, My Day

Today is the last day of the 12 Days of Christmas In July Blog Hop, hosted by Sarah @Confessions of a Fabric Addict.  Sarah is also having a quilt along with her beautiful Peppermint Twist pattern.  This also happens to be my day of sharing what I have been working on.

The full schedule for the blog hop is below, if you haven't had a chance yet to check it out.  Be sure to check out the quilt along also.

Wednesday, July 14th
Joy of Days Filled With Joy
Thursday, July 15th
Moira of The Quilted Snail
Friday, July 16th
Jamie of L'Fair Quilts
Saturday, July 17th
Bonnie of In Stitches With Bonnie
Sunday, July 18th
Joanne of Everyone Deserves a Quilt
Monday, July 19th
Kate of Katie Mae Quilts
Shasta of High Road Quilter
Tuesday, July 20th
Vicki of Vicki's Crafts and Quilting
Wednesday, July 21st
Leanne of The Devoted Quilter
Thursday, July 22nd
Kathy of Kathy's Kwilts and More
Sandra of Musings of a Menopausal Melon
Friday, July 23rd
Carole of From My Carolina Home
Saturday, July 24th
Joanne of Everyone Deserves a Quilt (Part 2)
Sunday, July 25th
Karrin of Karrin's Crazy World
Last year with Christmas money I received I bought some new dies for my Accuquilt cutter.  One of them happened to be a gnome die, which I had not used yet.  I have been making my daughters and granddaughter cushion covers which they can change with the seasons.  So I decided to make new ones with the gnome die.  My one daughter came over and requested a girl gnome too, so I made some hair for the girls. 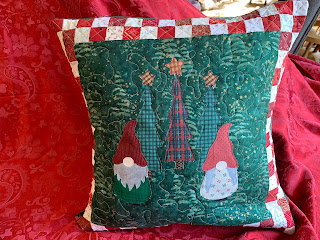 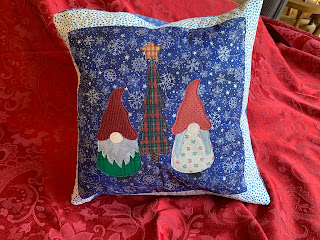 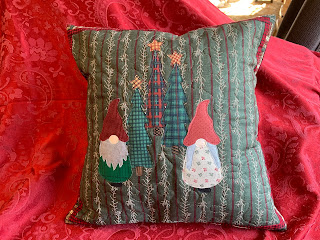 Apparently I have been on a gnome kick, and had gotten these little cutouts of some gnomes.  Last year Joy, @ Days Filled With Joy offered a pattern for a hexagon table topper.  I used that pattern for a couple of table toppers. 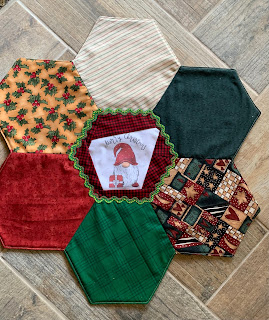 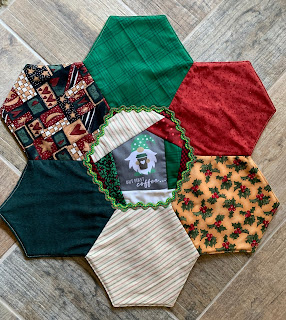 I have been collecting a lot of Pinterest ideas regarding gnomes too.  I found these gnome ornaments, and I made a bunch of these.  They are so cute.  I had some other things I had planned to make, but still waiting for supplies which haven't arrived yet.   I found this ornament at Ruffles and Rain Boots.  These are supposed to be just glue gun assembled.  Since I flunked Glue Gun 101 and burn myself  frequently, I did sew my hats, instead of gluing them, to reduce my burned fingers.    I plan to put these in my family's stockings. 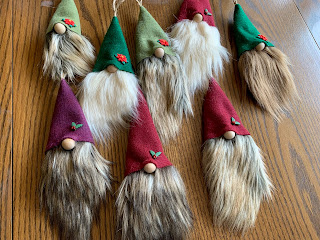 Hope you have had as much fun in this blog hop as I have.  Be sure and visit the others above, and Sarah's daily quilt along steps @ Confessions of a Fabric Addict.
Thanks for stopping by!
Posted by Karrin Hurd at 9:00 PM

These are so sweet. I love the cushion covers . I could see myself getting quite hooked on gnomes too. Have a great weekend.

Oh so cute! And how cool that you used my pattern! Hmmmm…I may need to buy that die 😀😂 xx

Your gnome projects are so fun, Karrin! I love the cushion covers especially. Of course there have to be a few girl gnomes! I bet your family members will love those little gnome ornaments, too.

Oh! Your gnomes are so cute!

Carole @ From My Carolina Home said...

Your gnome theme is just the thing! Your dad and DIL will love those pillow covers!

Thanks for sharing your Gnome collection. Each and every one is wonderful.

Thanks for linking up with Elm Street Quilts One Monthly Goal and congratulations on your finish!