Time again to check in for Slow Sunday Stitching at Kathy's Quilts.   I got a little more worked on this embroidery from Kathy Schmitz's One Stitch At a Time Club, and I will be working on this again. 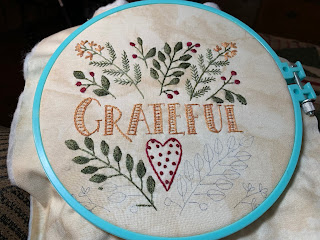 I'll be linking up for Slow Sunday Stitching at Kathy's Quilts.  Head on over, and check out what everyone has been up to.
This week has had its ups and downs, and I am feeling out of sorts.  I was trying earlier in the week to get caught up on the Ella Maria Deacon blocks.  These two blocks I have had trouble with.  The patterns said to add seam allowance to the templates, which I used my Add a Quarter ruler for.  Last week, I was working on this block, and when I got to the outside sections they were too small.    I trimmed the center block down, but still it was not enough.  I finally ended up doing this one over again. 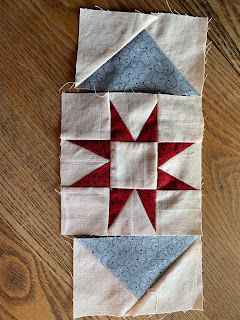 Then this week, I was working on this block. This wasn't going to work either.  The outside sections were too big. 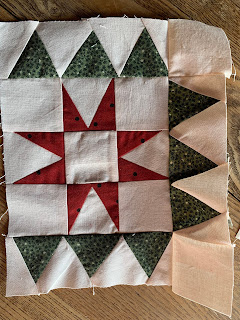 I stopped right here, discouraged.  I packed EMD things up and set them aside right now.  I spent the next two days reading all day!
My granddaughter Kyleigh is leaving for college again next week.  I wanted to make her a Valentine's cushion and ended up doing two.  I found this in the Cricut Designs, I bought some iron on vinyl and made up these cushions.  This is what we always say to each other, and I loved them. 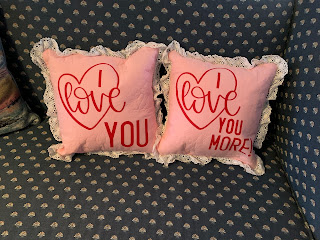 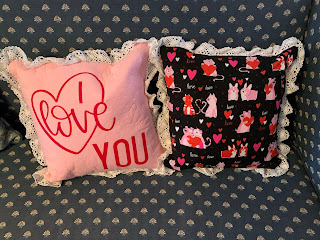 Speaking of Kyleigh, she has been designing and crocheting sweaters for their Chihuahua Ronald.  He loves his sweaters.  Apparently he doesn't like the hat so much! 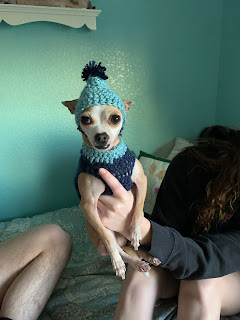 One piece of good news this week was that I had an interview with a resource center for possible respite for me being John's caregiver.  We are eligible for funding.  I need to get back to them next week about this.
The other downsides of this week were that my eldest daughter Kristen called and told me that our two grandsons, who just went back to in-person school last week, are now in lockdown for 2 weeks at home, and none of them would be over for at least two weeks.  Apparently someone in Jaeger's school tested positive this week, so everyone coming in contact with him are in lockdown.   That is the one highlight in our days to seeing our grandchildren and daughters once in awhile.    Our COVID numbers are terrible around here.  Since 12/31 our county has had 29 deaths, 1929 new cases as of Friday.
The other problem this week was that Friday John seemed to be somewhat weaker.   He had trouble standing up from the toilet and required a lot of my strength and effort.  He weighs probably 100 pounds more than me.   I did finally get him up from there and seated again in his chair.  Last night he had gotten in bed, and was trying to scoot up to the top.  I noticed that the sheets had come loose in the top corner and I couldn't fix it with him sitting on the bed, so had him move over to his chair.  I had already gotten him ready for bed at night, which included taking off everything on the bottom half.  I changed his sheets, and then went to get him back up out of his chair.  He requires a lot of my assistance, I usually take hold of his one arm, and pull him up by the seat of the pants.   Because he had no pants on, I couldn't pull up the seat of his pants.  I tried putting on the belt around his chest that PT had given me, but even that didn't work.  I finally ended up calling the Fire Department who helped him get back to bed.
Last night I didn't get much sleep at all, worried what we were going to do if I couldn't get him in and out of bed.   I don't want to place him, I think we can still manage, but it was on my mind all night.
Hope this week turns out better, and hope everyone is healthy and safe.
Posted by Karrin Hurd at 9:00 PM

Grateful embroidery is prittier each new week.
It is really bad when you follow all the size instructions and at the end the units didn't fit.
I hope everything goes well for you Karrin and your family. Take care of yourself and stay safe.

The embroidery is beautiful, Karrin! I will continue to pray for you and John. I know exactly what you mean about not sleeping well because you are trying to think ahead of how to handle things. This verse was in my study of Isaiah this week, and it really spoke to me. It is near the end of Hezekiah’s recounting of the mortal illness he was healed from. Isaiah 38:14b O Lord, I am oppressed, be my security. I hope the caregiving assistance can be worked out to give you some respite. XXOO

Your "Grateful" embroidery is so lovely, Karrin! The perfect thing to be working on right now. I love the pillows for your granddaughter, too - a sweet message for you both! I'm sorry to hear about your grands having to quarantine and that John is weaker again. It's hard to lose sleep when you know you need it in order to function the next day. Thinking of you and hoping for some good help for you.

I'm sorry to hear you are struggling with your husband again, I hope you can get some respite for yourself as much as him! On a positive note your embroidery looks amazing and I love that knitted jacket and hat for the dog! Hope your family keep well too.

Hi Karrin, You have so many lovely stitching projects- I admire them all and find it inspiring to read your posts. I'm so sorry to read of your struggles with your hubby. I can't help but identify in the sense that we would be in the same predicament if Tony became weak like that. And weakness is something he experiences from time to time-the last time was when he had lung embolisms which he's been treated for but have made him weaker than he was. So I too will be thinking of you and hope your wonderful stitching, etc. will help soothe the nerves and calm the soul.

I am saddened to read, Karrin, that you and John have had a difficult week. You must have so much on your mind and then your grandchildren and their mum are to be in isolation for two weeks. Wish I could knock on you door and give you a big hug♥ As for your stitching, it is always joyful, even when little boo boos happen. I love your Grateful stitchery. It resonates with me at this time. Love too the sweet Valentine cushions; love the sentiments. Then there is the sweet sweater and hat Kyleigh knitted for Ronald...too cute. Thinking of you as this new week arrives. I will be thinking of you as you try to sort out what you should do. Wonderful that you are eligible for respite. I think it would be wonderful, and very much needed for you. Take care my lovely friend. Sending you many a virtual hug♥

Your embroidery piece, Grateful, is wonderful! I love your stitching!

Your embroidery piece is coming along nicely.It's a wonderful pattern.

So sorry to read of your problems at home, it doesn't make it easy for you at all. Do hope you can get some respite care sorted soon. On a brighter note, the Love You cushions are beautiful, and will be much appreciated listed, I'm sure.

Sorry to hear that John was not doing as well this past week. I hope it was a temporary thing and that things will improve. The embroidery is beautiful! those blocks need to be in time out for a while, I think. Take care.