I can't believe another three weeks has flown by since our last Hand Quilt Along.  Since then, I have gotten a few things done.  I finished this Ella Maria Deacon block. 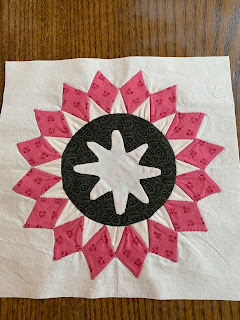 I also finished another Kathy Schmitz One Stitch at a Time blocks. 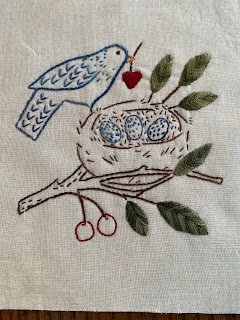 These week I also had a couple of other finishes by machine.  I finished this block for the Pieces From the Past Sew Along by Melva Loves Scraps. 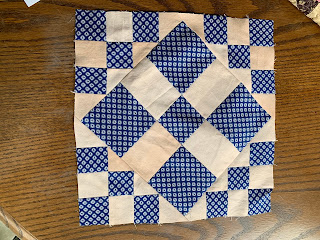 She gave the instructions to put it together, so I went ahead and put my blocks together. 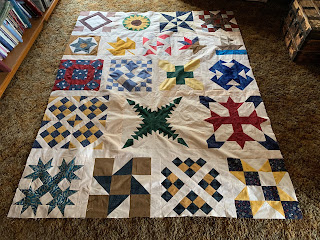 This week I also got the last row on my Stay at Home Round Robin that was organized by Gail @Quilting Gail.    The prompt this week was to add pinwheels.  I made a few more log cabins from last week, and added to the pinwheels from this week.    This now measures about 64 inches square. 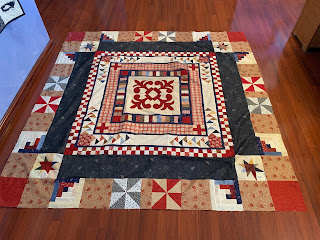 Another one of my slow stitching projects this week has been making hexies.  There is a 100 hexie challenge in 100 days on Instagram and I have been doing a handful each night.  My papers are for 3/4 inch, so they are pretty small.  I had won some charm packs last year and used up one pack. 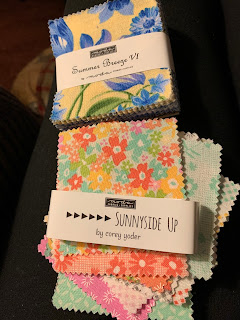 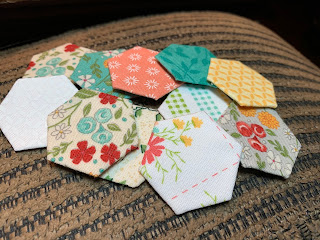 This week, I will continue working on the hexies, I have a Kathy Schmitz older stitchery to work on, and I am prepping some Ella Maria Deacon blocks to applique. 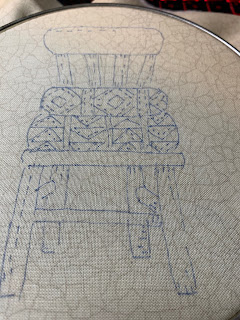 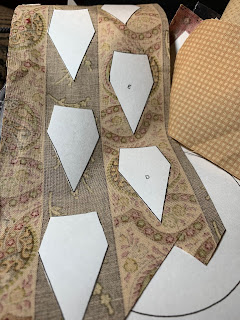 Check out the other Hand Quilt Along Links below.

This Hand Quilt Along is an opportunity for hand quilters and piecers to share and motivate one another. We post every three weeks, to show our progress and encourage one another.  If you have a hand quilting project and would like to join our group contact Kathy at the link below.

Kathy, Margaret, Deb, Nanette, Sharon, Karrin, Gretchen, Daisy, Connie, and Sherrie
I will also be linking up at Kathy Quilts for Slow Sunday Stitching.  Be sure and head over there and see what others have been up to.
Sunday, March 7th is a bittersweet day for me.   March 7th was my mother's birthday.  She would have been 89.  My mother died in 1997, so she has been gone a long time.   My mother was 17 when she got married, and I was born when she was 18, 10 months later.  These are a couple of crazy quilt pieces in which I printed the images on silk. 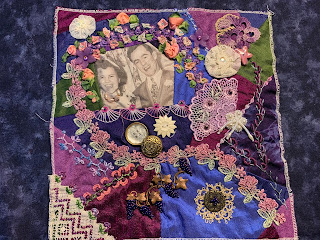 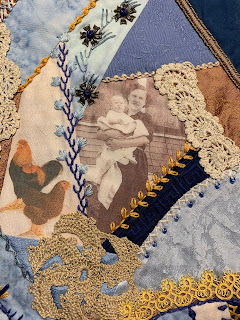 She lived a tough life.  She was born in rural Arkansas in 1932 the youngest of about 7 children.  Her oldest brother was murdered, probably for his paycheck.  Her mother once carried one of the babies to the Dr. which was a number of miles away, and when she got there the baby was dead.  Her mother died when she was 10.  Her father was elderly when she was born, and had mental issues, so she went to live with her oldest sister Eva who was 20 at the time.  She moved to Maryland when she was about 17 which was where she met my dad.  In 1968 while I was in Europe with a religious group, after I had graduated from high school, she contracted the Hong Kong Flu and it went to her kidneys and she got glomerulonephritis.   Because she was out of work so long, the telephone company fired her, and this set her into a tailspin.  I don't know whether she was bipolar or schizophrenic, but there were several times she ended up in mental hospitals for shock therapy.  After that, for the rest of her life she was doped up to help her function.  I have been missing her today.
Anyway, that is it for today.  Thanks for stopping by!
Posted by Karrin Hurd at 6:15 PM

Labels: Ella Maria Deacon, HQAL. Slow Sunday Stitching, One Stitch at a Time, Pieces from the Past

Oh goodness! So much pretty! Your grandson’s quilt is great!

You have so many pretty projects in the works. I love the quilt for your grandson. Your mother's story is fascinating, but tragic. Enjoy your memories.

I love your round robin, looks a fun project. Pretty hexies you are making too. Your mum certainly had a tough life by the sounds of it , but I'm sure you have many happy memories too.

Your mother was a survivor but had a very difficult life. Big hugs to you today. You have had a very productive week and I know your grandson will love his quilt.

Oh my goodness, your mum had the toughest of lives, Karrin! So many sadnesses and tragedies. Your crazy patchwork honouring her is exquisite. Why, I could look at the many stitches and fabrics for ages. I am always astounded as to what you achieve with your stitching and quilting each week. Why, I believe you are Wonder Woman!! Love the sweet little birdie holding the red heart and your blue block...be still my beating heart! Jaeger's quilt is beautiful, as is your Stay at Home Round Robin. 'Tis always a joy to spot a hexie or two. Those little charms are so pretty and perfect for your hexies. Sending many hugs to you today, as you remember all those sweet memories of your dear mum. Xx

Love your SAHRR!!! And what a perfect way to use a wonderful orphan block!!! I really like how the log cabin blocks frame each border! Almost like book-ends!

I hope you link up to the SAHRR parade on March 29!

You are working on several interesting projects, Karrin and it was a very productive week - Hugs

Your projects are all lovely,the little blue bird brought on a smile though it’s so sweet. Your mom definitely had a rough time of it, it was sweet of you to remember her ,sharing your memories with us. 🤗